Over the years, I've attended a lot of different conferences, including Creative South, Circles, and Adobe MAX. However, I've never been to CropCon in the last four years that it was in Baton Rouge, LA, but I have wanted to attend. 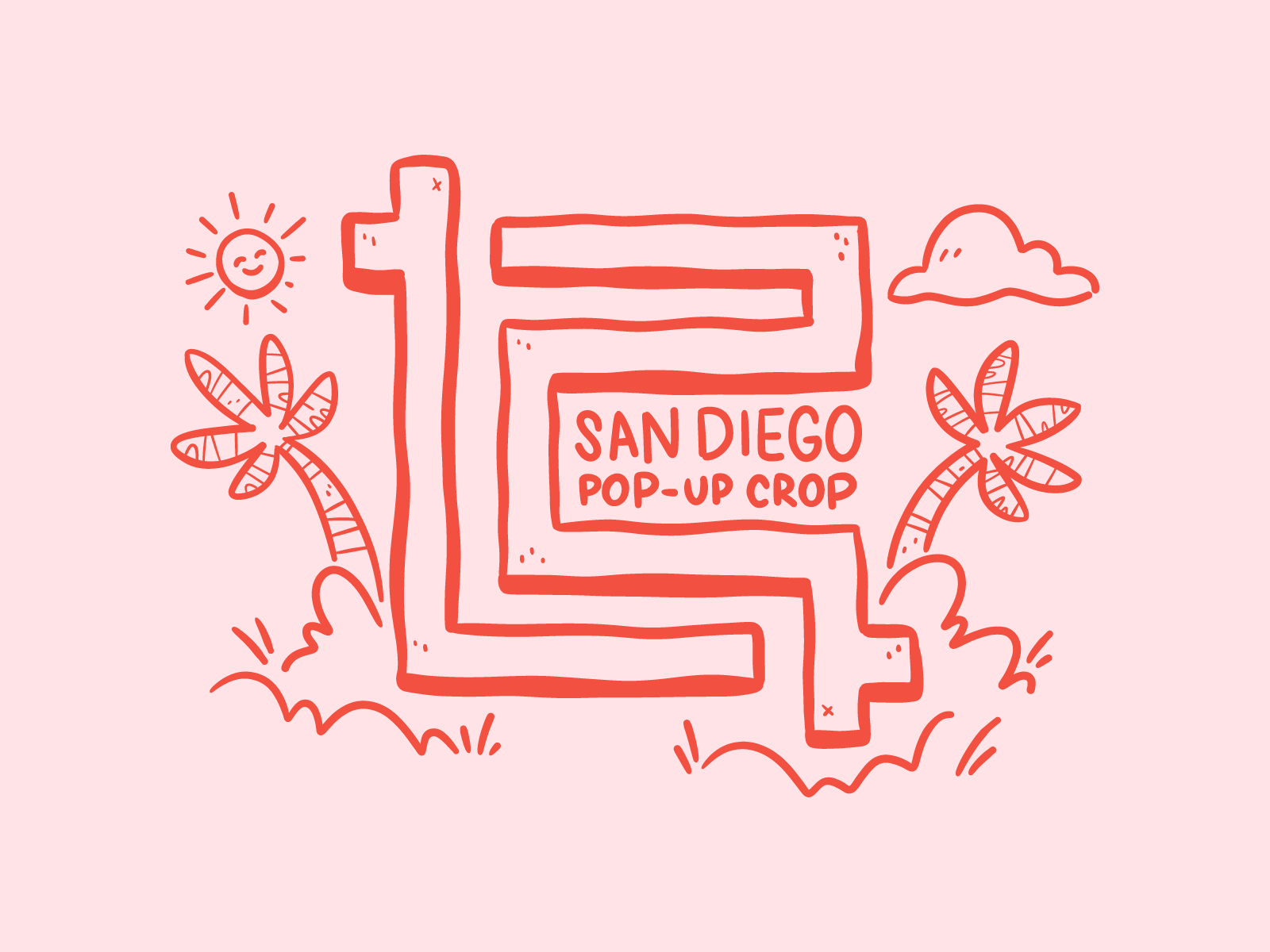 Over the years, I've attended a lot of different conferences, including Creative South, Circles, and Adobe MAX. However, I've never been to CropCon in the last four years that it was in Baton Rouge, LA, but I have wanted to attend.

A few months back, while chatting with the founder of CropCon, Matt Dawson—known as StayGrayPonyBoy on social media—and he shared with me the news that they were putting on a small one-day pop-up CropCon here in San Diego. It's safe to say that I was super excited.

So, I purchased my ticket and created some branded stickers for Blue Cyclops Design Co. for the event and was ready for a fun time.

The day before the event, they had a little mixer at a local hotel for the attendees and a "mural walk"—a tour around San Diego's East Village to view and learn about some of the Murals produced by Ladies Who Paint.

The events before conferences are always a lot of fun to attend because you get to spend time with other attendees and learn a bit about who's attending the conference.

At our little mixer, I not only met a few new friends but some old friends I've known for years from attending other conferences like my friend Dave Clayton—of Astute Graphics, who's coming out with a new book very soon on Adobe InDesign. It was fun catching up with Dave and some of the other attendees.

The highlight of the night was the mural walk and seeing all of the fantastic murals throughout East Village. In the past, I used to work in San Diego's East Village, and in the three years since, things have changed a lot from new condos and apartments sprouting up, to all of the beautiful murals like the ones we saw that night.

One thing that I'd also like to add here is that one of the co-founders of Ladies Who Paint, Roxy Prima was our guide for the tour and a speaker at the main event.

The Emcee's for the Event

What is a conference without a good Emcee and the San Diego Pop-up CropCon had two incredible Emcees—husband and wife duo, James Hsu & Katia Oloy.

I first met this amazing power couple back in 2017 when they spoke at Creative South. They are so much fun to hang out with and talk to for sure. If you've never checked them out or met them in person, be prepared for a fun and wild ride.

We even had lunch together with another Creative South Alumni, Hebah Abdelqader.

Also known as Fugs to his friends, Michael Fugoso was the first speaker of the conference. Michael is a local graphic designer and illustrator who specializes in these spectacular paper-like illustrations that I'm honestly shocked don't destroy his computer from their complexity.

Fugs has worked with a variety of clients in the past, such as Nike, NASA, and SpaceX, to name a few. He shared during his talk a bit about his strategy for targeting clients that I thought was pretty unique and interesting. Instead of targeting a client like NASA directly, he instead created work for an institution associated with them, like Purdue University, who is tied to the National Aeronautics and Space Administration.

Another interesting aspect that he discussed in his talk was what he referred to as Flow State. Unlike just being in the groove or flow, like what most see the definition as being, according to Fugs, being in a Flow State prevents you from burning out because instead of working your butt off all day every day, you're instead only working 7/10 of your capabilities. By doing it this way, you're not over-working yourself, and instead, you're leaving more gas in your tank each day.

The second speaker of the event, Brian Steely, founder of Steely Works based out of Atlanta, GA, did not disappoint. I can't remember where I first met Brian, but I've been a big fan of his work for a long time.

One part of his talk that really jumped out to me was to "set goals, but don't just look at them as goals, instead, look at them as points on your route." I haven't heard goals talked about in this fashion, and I think it is essential.

The biggest problem is that we focus on the "end goal" and not on the journey of what happens after. Instead, we need to be strategic with our goals but also look at them as touch points in our lives.

Something else, Brian mentioned that I found compelling was that as creatives, "if there isn't passion behind your work, it will show."

If you're working a day job that you're not passionate about or that you don't love, it's going to show in the work that you produce. There have been times where I've worked on projects and lost the passion or zeal for what I've been doing, and it clearly shows up in the final concepts/designs. It's then important to remember then if you're not passionate about what you're creating, stop doing it.
‍

The last talk that I attended during this event was that of Josh Higgins, an incredible rockstar both in music and design.

He is a local of San Diego, and we found out during his talk that he married his wife five years prior at the very same venue the event was on the stage he now spoke to all of us on which is very serendipitous.

Josh shared multiple themes throughout his talks that I feel really resonated with me and potentially with all of you as well.

The first theme being "Make A Difference Beyond Yourself." Josh embodies this theme through his work for charities to raise money for relief efforts like Haiti and Hurricane Katrina.

Working on projects for the greater good is something as creatives that we don't have to do, but when we can, it can feel so good, and it sometimes allows us to practice or stretch our creativity in new ways we may not be able to do regularly.

"Make A Difference Beyond Yourself." - Josh Higgins

Another theme that hit home for me was the "Foster Creativity & Challenge Perspective." Through his work at Facebook, specifically the Analog Research Lab, he helped foster an idea of reducing stress and increasing fun through analog creative means. I had the chance to check out the lab on my tour of the Facebook HQ in 2018, and I was impressed and wished I could have stayed longer to take one of their workshops or create something for it.

Unfortunately, I missed two of the talks, Roxy Prima and Francisco Reyes Jr.—Never Made— who made these fantastic prints and bags for the event.

Ultimately I had a blast at the event, and the after-party where I met a lot more of the other attendees was spectacular. I had some deep conversations, one of which ended up lasting almost two hours—shout out to Ginny and Darlene!

The next CropCon is going to happen in April 2020 in Austin, TX, and I hope to attend and see some of you there.