What You Need Before You Start Your Next Design Project

Learn about a key part of my process that I neglected for so long and one you may be neglecting as well. 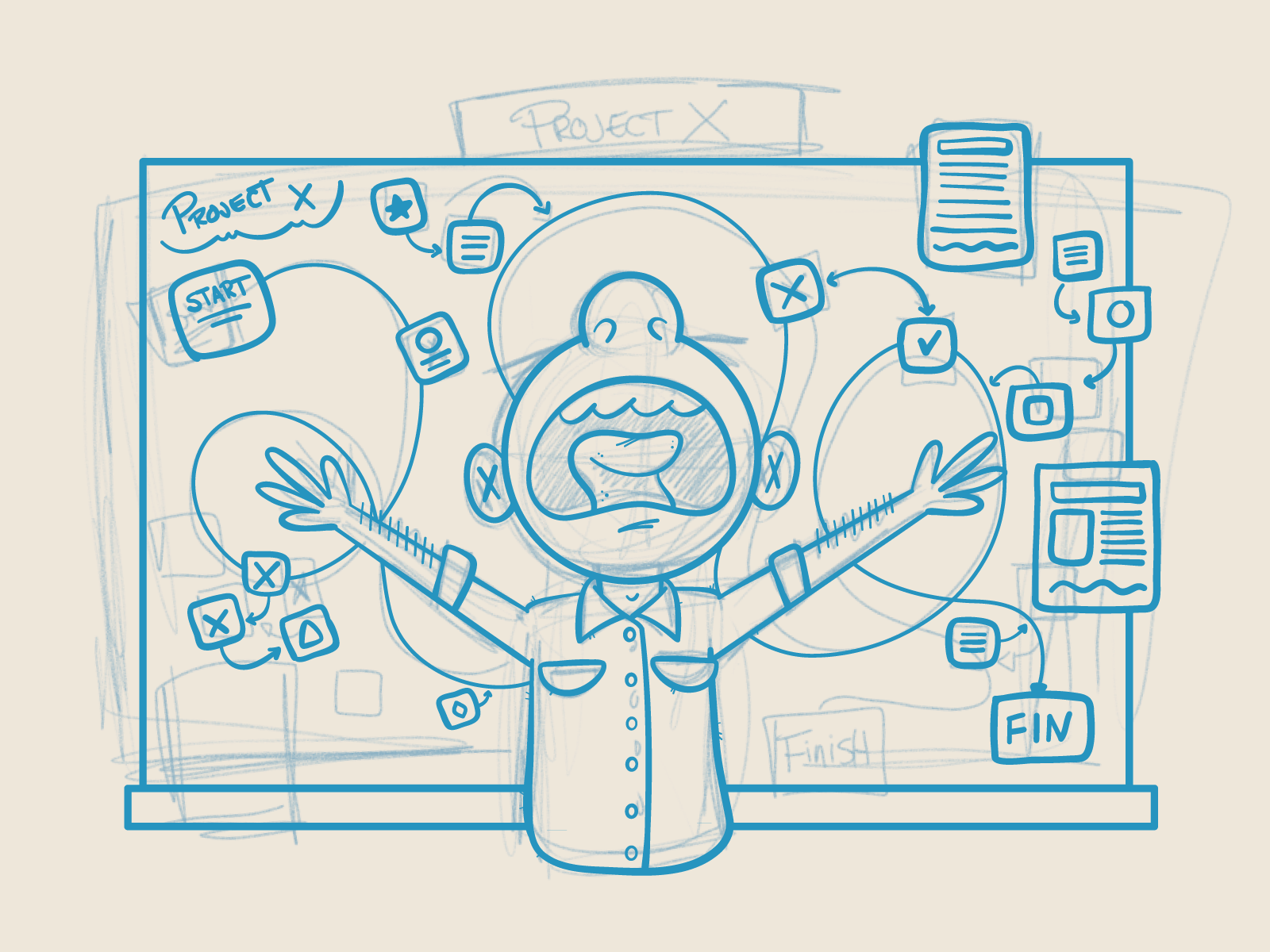 I have been freelancing now professionally for between 6–7 years — 2 of which have been full-time — and even now, I'm still learning and improving on my process.

Case in point, one of the new things that I changed about my process was instituting project plans at the beginning of the project and now a new productized service that I'll explain more about later.

Now you may read that and ask yourself, "What? You went years without having any project plans or roadmaps?" No… I did have very loose plans for my projects or even had some clients spoon feed me their policies (some of which weren't very helpful and also derailed the projects). What I was missing were plans that formed a solid backbone for the projects. In reality, what I had were plans with a backbone similar to that of a chocolate eclair, which could slow a project down — sometimes to a complete halt.

In the past, whenever a project would start, we (my client & I) would lay out a basic idea of what it would entail within a proposal or statement of work. Within the account of work, we would say something along the lines of "one header illustration, three supporting illustrations, etc." All of which was what the client had initially been said they wanted — usually to get a general idea of how much the project would cost.

Additionally, when the client says, "we want a header illustration," that's not a whole lot to go on. It's hard to price out something like that because it could be either really simple or very complex. Without knowing the style, the exact content, and purpose of the illustrations, it's hard to give context around the work, time, etc. to create an accurate price for something like this.

Unfortunately, I wasn't putting a whole lot of time into helping my clients tell the best story to educate their users/customers about the services they offered. I was taking their word and ideas as gospel and wasn't doing a whole lot of thinking into how things could work better for my clients.

Around the time that I became a full-time freelancer, I began changing things up and focusing a bit more towards the need vs. want. I noticed that my relationships with my clients began to improve, and I began to attract not only more clients but higher quality leads as well.

The first thing I started implementing was giving my clients a bit of homework at the start of each project. I'd share with them a simple google doc that would help obtain precisely the type of information I needed to get a jump start on our project. The document would include the following touchpoints for each of the illustrations:

Each plan, for the next six months, would consist of this type of homework, and I began noticing that they were having trouble figuring out what to put under each bullet. I had to readjust things to include comments and examples of what goes where. That would fix it.

In theory, it seemed like the perfect way of getting all of the information that I needed to complete the project, but there was just one major drawback. There were still changes coming down the line as we were working. More things were being added, others were being cut — mid-production. There was still so much chaos!

I eventually felt it was just the norm and that I would have to work through it every time with clients, both new and old.

One day though, I happened to be on a call with my good friend Peter Deltondo and a prospective client that we were both hoping to work with together — him doing the UI/UX and me doing the branding & illustration work. As he was discussing his part of the project and his process of doing things, he happened to explain what he referred to as "Discovery."

Now, this term wasn't new to me; I had heard it countless times before both in articles and when I worked for agencies in the past. It was something that primarily is used for branding & UI/UX projects. Before a project is started, an agency or freelancer will do research on their client's industry, create a sitemap for a web app or develop wireframes for a marketing site — to name a few. All of these can be apart of what is known as discovery. In this instance, it's for a large project with a lot of unknowns. This discovery process would help him identify all of the project requirements to ensure not just an accurate estimate for the entire project to the client, but a strategy for building a successful product for the business and not building out an unpolished idea that may not succeed. This is all work that would need to be done regardless, but it was positioned ahead and separate from the full project. Essentially it placed him as an expert advisor willing to EARN his business for the whole project by helping provide a path for the project's success.

In essence, the difference between discovery and discovering at the beginning of a project is that it's done before a project is even started. It allows you as a freelancer to help your client or a prospective client to realize their needs for the project. You can spend more time with the client, sitting down to go through their current website and finding where illustration may benefit from explaining some obscure feature, currently being represented by some stock photo of a smiling woman with a headset on.

It became apparent to me, on that call, that this was what I was missing. Why couldn't I do the same thing for my illustration projects?

Most of the time, when creating illustrations for the web, my clients come to me saying they don't know what they want for sure, but it'll be between X & Y number of illustrations. Instead, what if I offered to them discovery, where I walk through their wireframes with them and help to craft the story they need to share with their users.

By doing this, I'm not just applying my illustration skills toward helping my client but those I picked up as a UI/UX designer before going full-time freelance. I'm able to help my clients even more than just creating pretty drawings or by crafting the story that's already being stunted by the square container they put it in.

The exciting thing to remember here is that all of this is before the project has even started. We're laying the groundwork for the project together, figuring out what is needed and how it will benefit the client's brand as a whole. With that being said, it also means there's always the possibility that we may not work together. The client could discover that there's a lot more work to be done then they can afford at that time, or that maybe I'm not the right fit to help them.

The good thing is that they haven't committed to the project yet, and so they can decide not to move forward. If they do choose to go that route, they aren't leaving empty-handed. At the end of the discovery, they receive a roadmap detailing everything we discovered along with my recommendations for moving forward that they can then have me move forward with or someone else (if they so choose to).

The best part though about this whole concept of discovery is that it can be used for almost any type of project or creative industry.

Let's say, for instance, you're a Photographer (by the way, I'm not a photographer, but I can speculate), and you continually find you have clients coming to you wanting you to photograph their events. Still, they don't have very much direction for you to run with. So you offer to help them draw up a roadmap to figuring out what they need from the shoot and how you (or another photographer) can help them. You take an hour with the client, and you have them walk through the event's schedule, asking them to point out key moments or individuals that should be photographed. Then, you can make suggestions (based on your experience) to potentially set up a Photo Booth for the attendees to get their photo taken and share them (and your client's event) on social media additionally you're giving them a keepsake that will allow them to remember the moment, the event and your client in the future.

Something to also think about with discovery is that you're pulling these things (the research & road-mapping) outside of the full project in hopes of landing the larger project & establishing that you know what you're doing. You're able to show your potential client that you're not just a pixel pusher or someone who can draw pretty pictures but someone who is an expert in their field.

Which is what we want for our clients, right? Success!

The thing that I was missing and the idea that you may also be missing as a freelancer or small studio is the ability to create a reliable roadmap & plan for you and your client's engagement.

This is something that took me a while to figure out, but once I did and started to implement it into my workflow, I noticed that projects went smoother (without many bumps in the road), and clients seemed way happier.

Next time you pitch a project to a client, pitch a round of discovery to help bring everyone in on the same page, and offer a solid plan of action.