Branding A Ranch in the Sierra Nevadas

In the summer of 2020, we partnered with Leaping Daisy Ranch's owners to create a visual brand system for their off-grid getaway in the Sierra Nevadas. Working on their visual identity with a heavy dose of inspiration from nature and the outdoors became one of our favorite brand projects of the year, and it is still a growing partnership that we hope to continue with more projects to come. 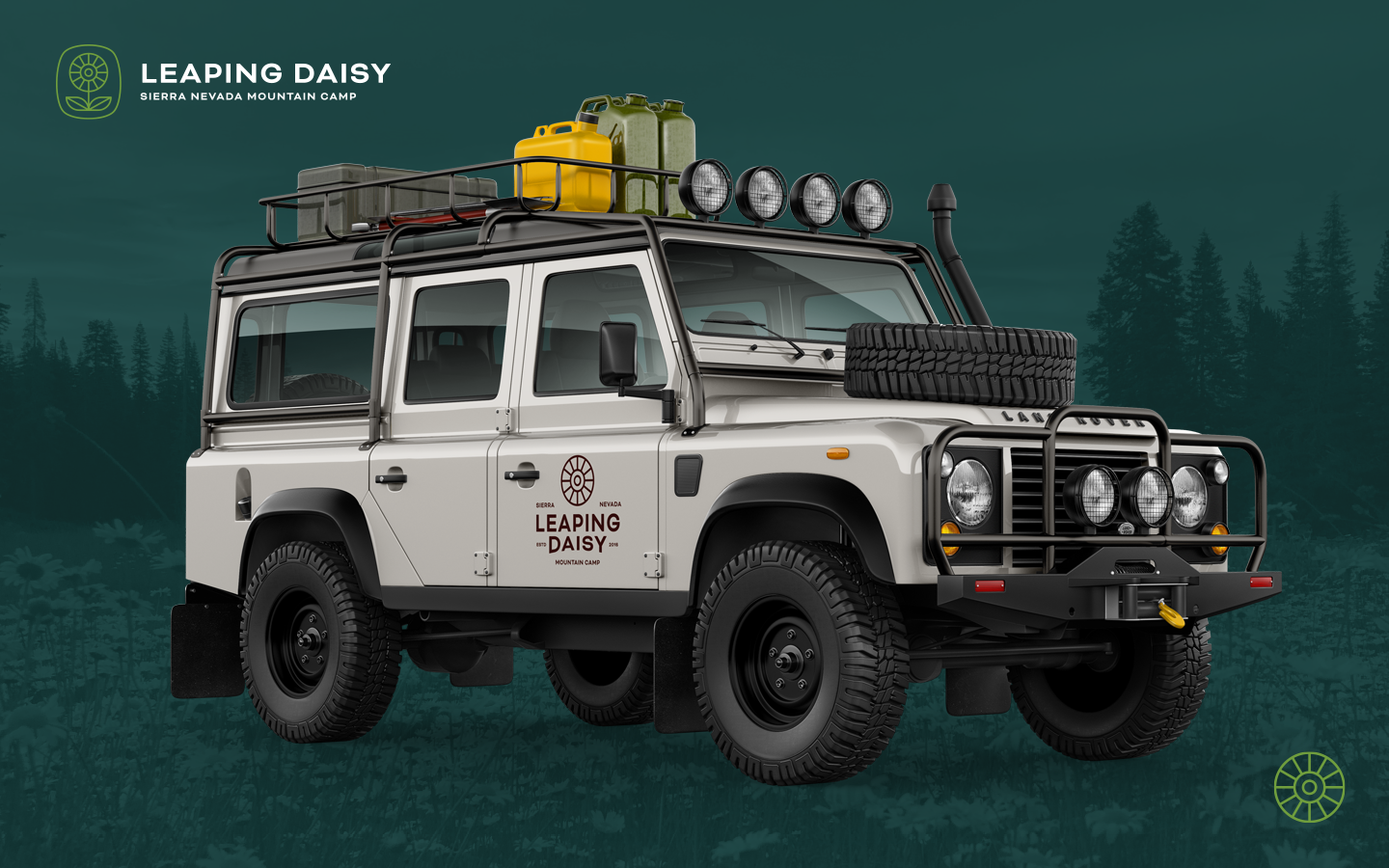 At the beginning of the project, we were lucky to have a surplus of information provided by the client — a library of photos, videos, background information on the ranch, and more. This information allowed us to get a good idea of what the property was like, what it was used for in the past, and how they planned to use it in the future.

What's cool about Leaping Daisy is that it's had a pretty interesting history. Before our client acquired the property it was an old mining camp, a ranch where cattle grazed, and more.

Our first step was to take the information and create a series of style scapes — a more detailed version of a mood board. These style scapes allowed us to develop a stable outlook into what design styles the client gravitated towards and how we could tell the brand story.

We knew that we wanted a simple design style, but one which felt more retro than modern. In our discovery, we decided that it would be best to use the ranch as inspiration for the imagery we’d use in the brand mark. What we didn’t know at the time was that a happy accident would lead us down to an exciting and successful path.

From the information gathering and style scapes, we were ready to move on to the next stage of our process: exploration. This is where the fun began. 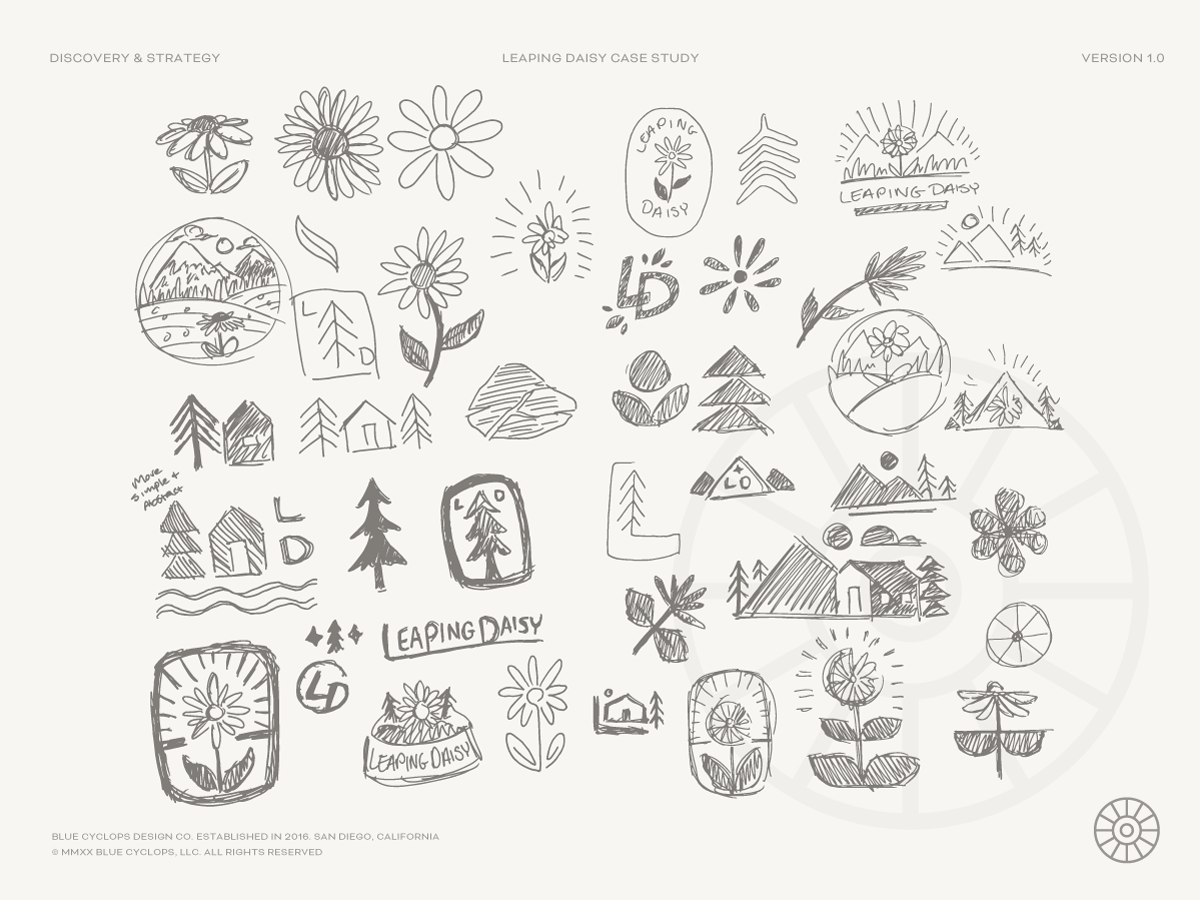 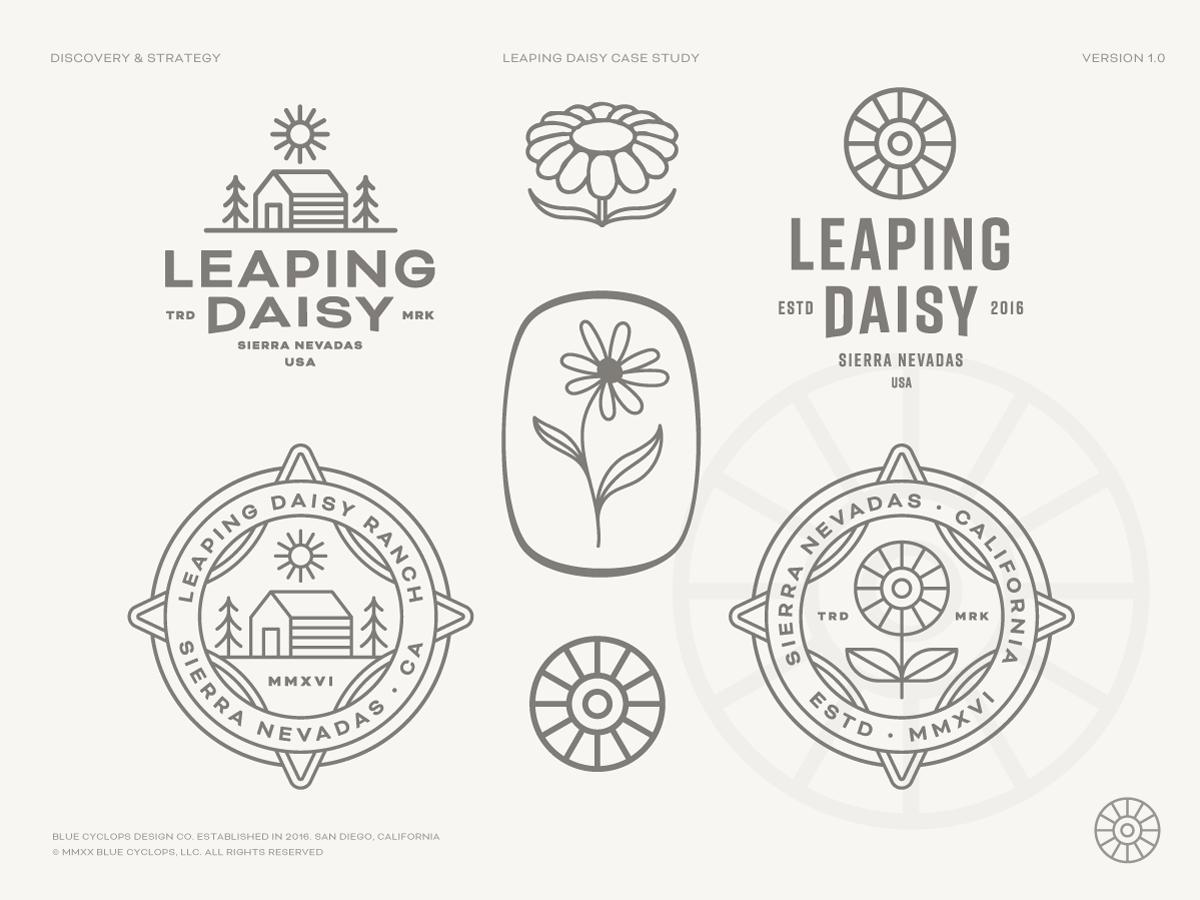 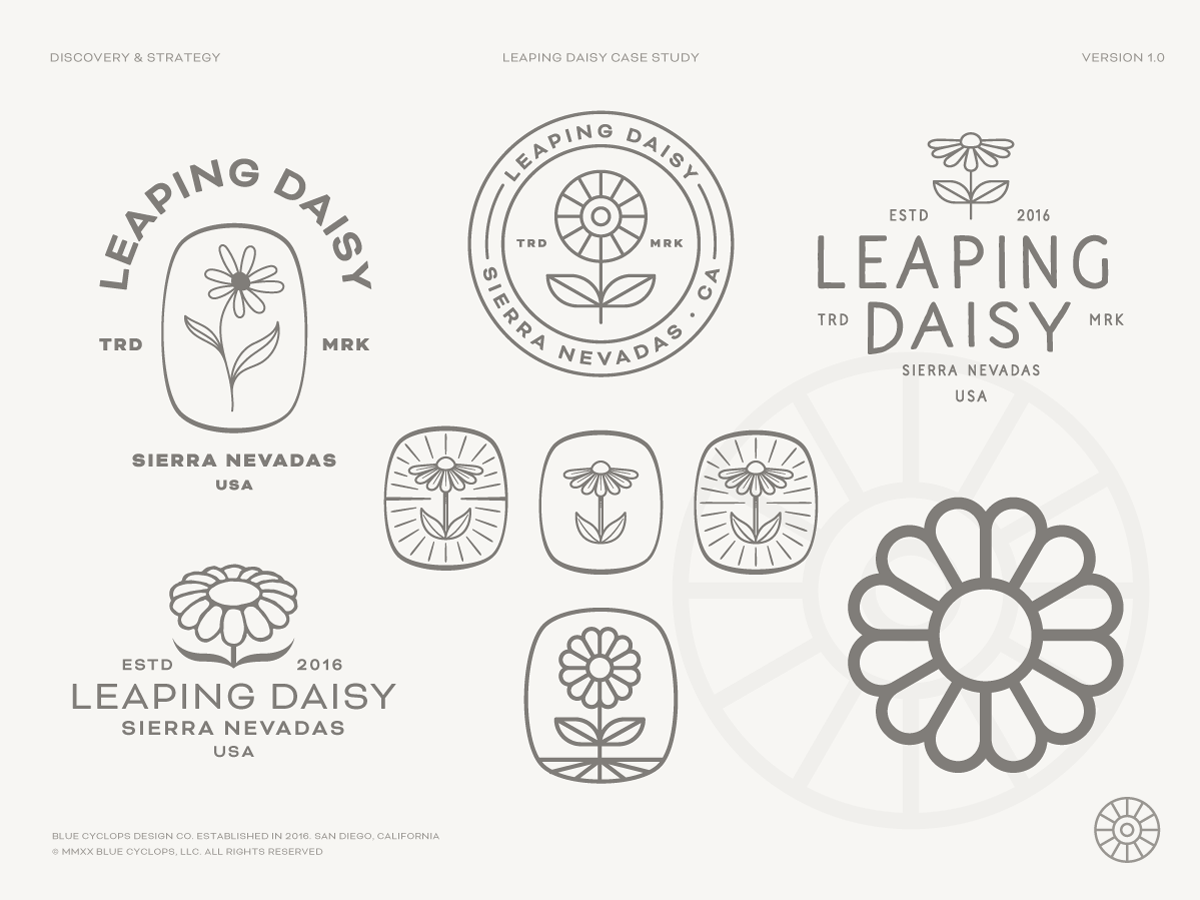 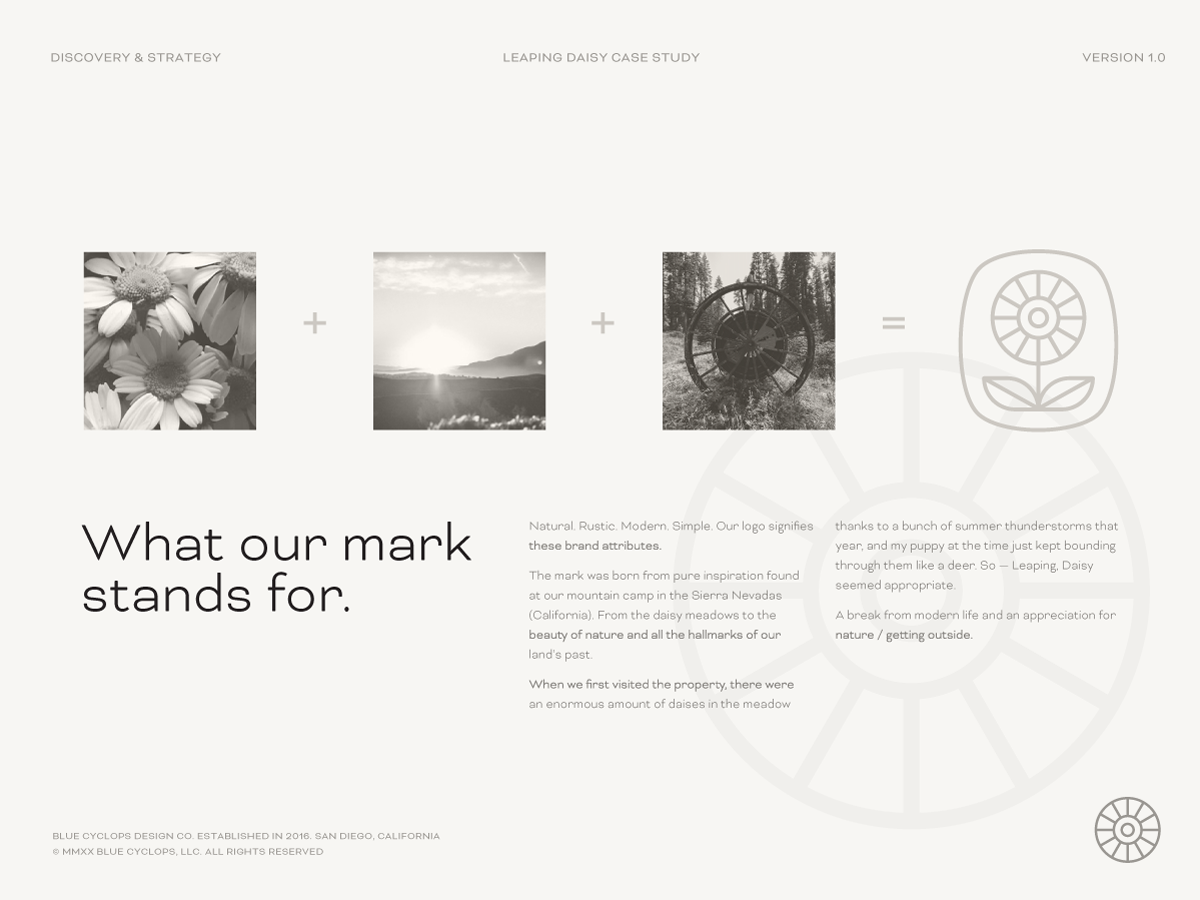 Taking what we learned in our discovery & strategy stage, we were ready to begin our deep dive into crafting the Leaping Daisy visual brand system.

We began our exploration with a wide range of marks and typefaces for logotypes. The marks and symbols we explored included predominantly daisies, the sun, the mountains, outdoors, dogs, and more.

These symbols became our focus due to background information we learned about the property involving how it found its name, Leaping Daisy. The client’s dog would leap through meadows of daisies throughout the property when they first explored there.

Very early on, the client seemed to gravitate towards a simple mark that was dual — representing both a sun and a daisy. Later, from the client, we would learn that the mark also was reminiscent of these large cable spools that were found on the property — something we only found out about later.

After another round of exploration, we decided the “spool” direction was the one we would ultimately go with and expand upon and create a responsive brand with elements that could be used in many different ways.

For the typography, we would use a simple sans serif typeface called Bicyclette, an Adobe font. This typeface would not only be used in the responsive branding but the supporting type as well. 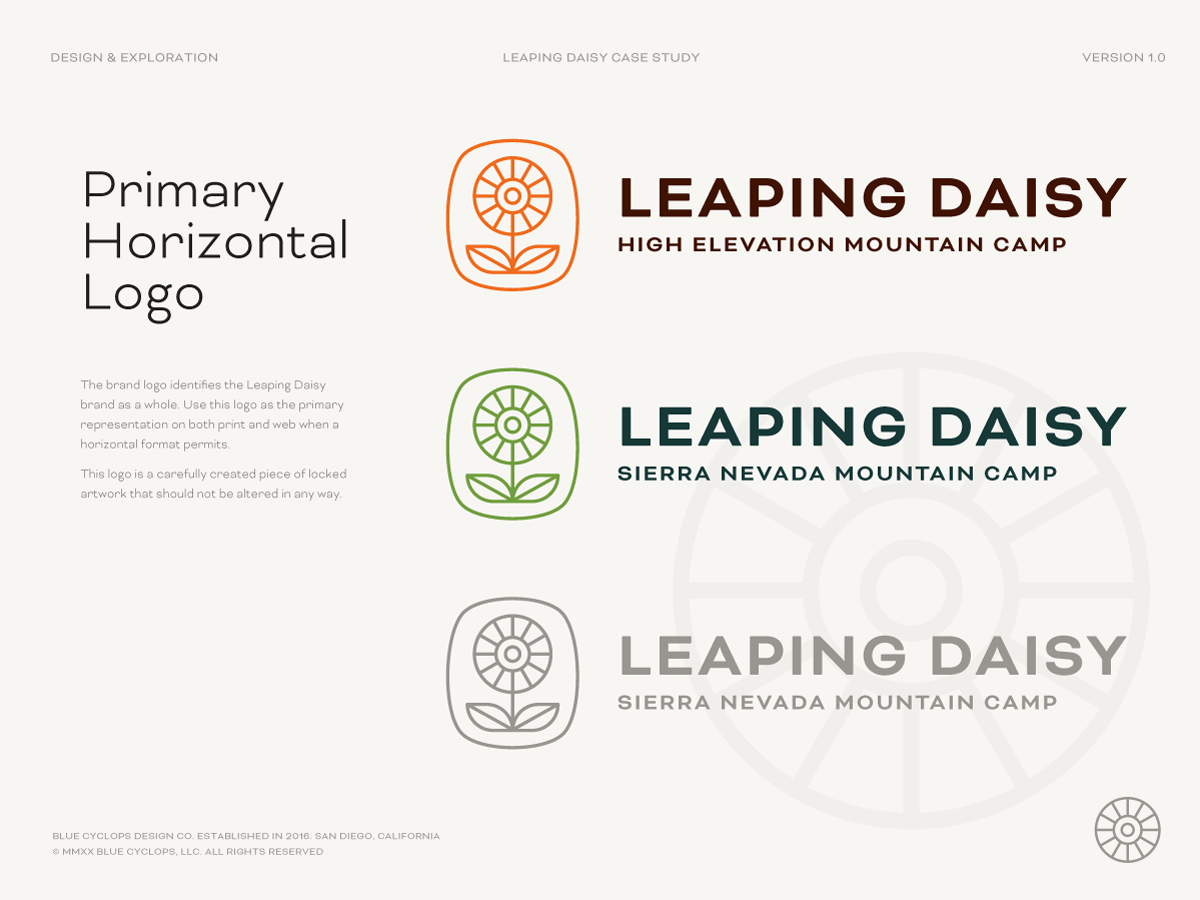 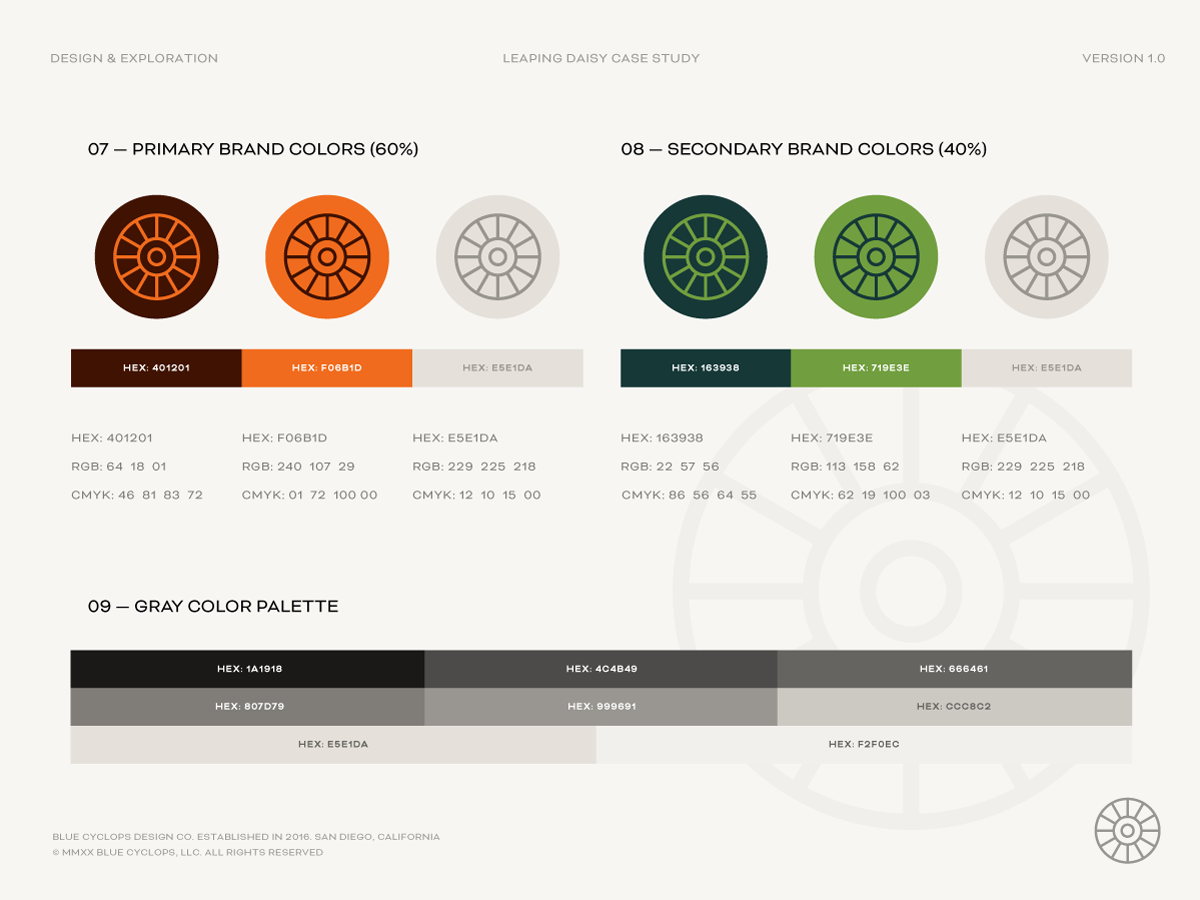 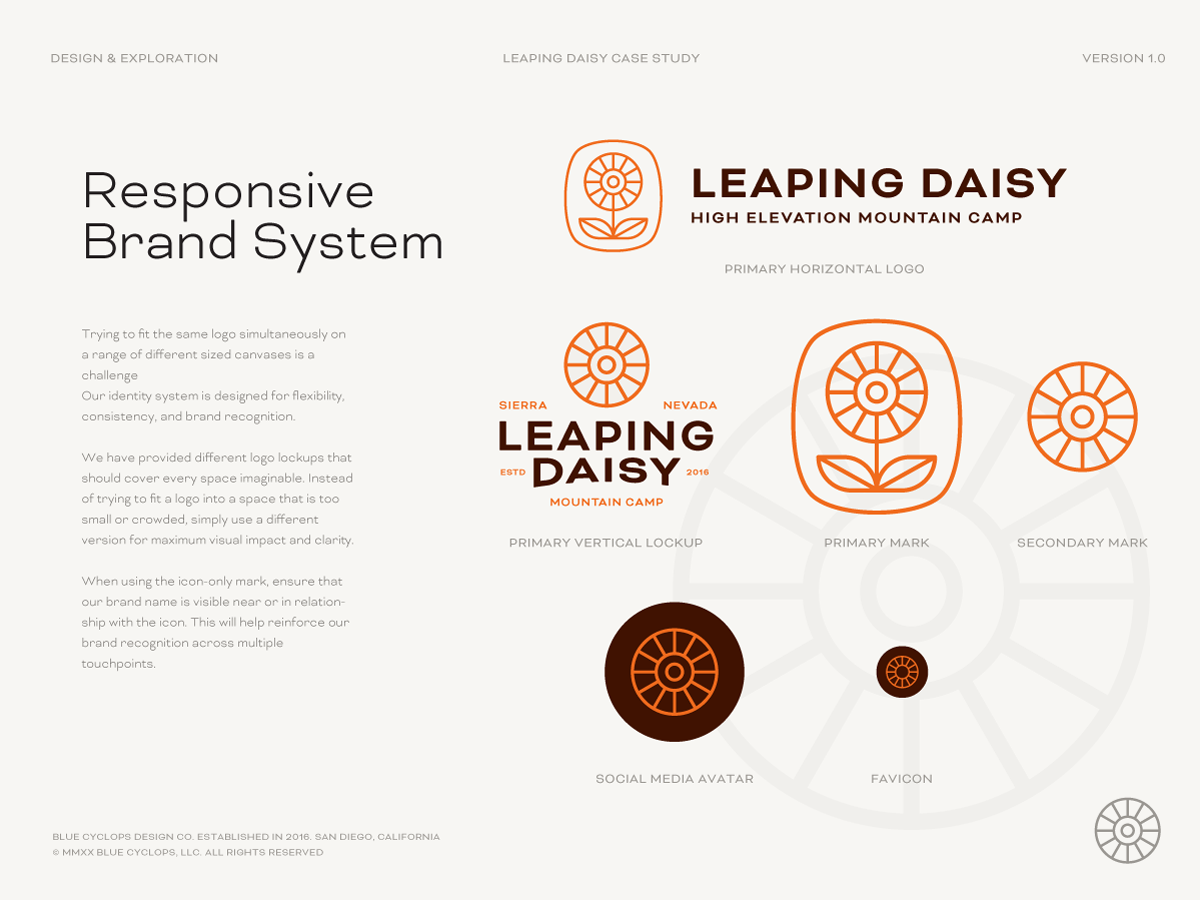 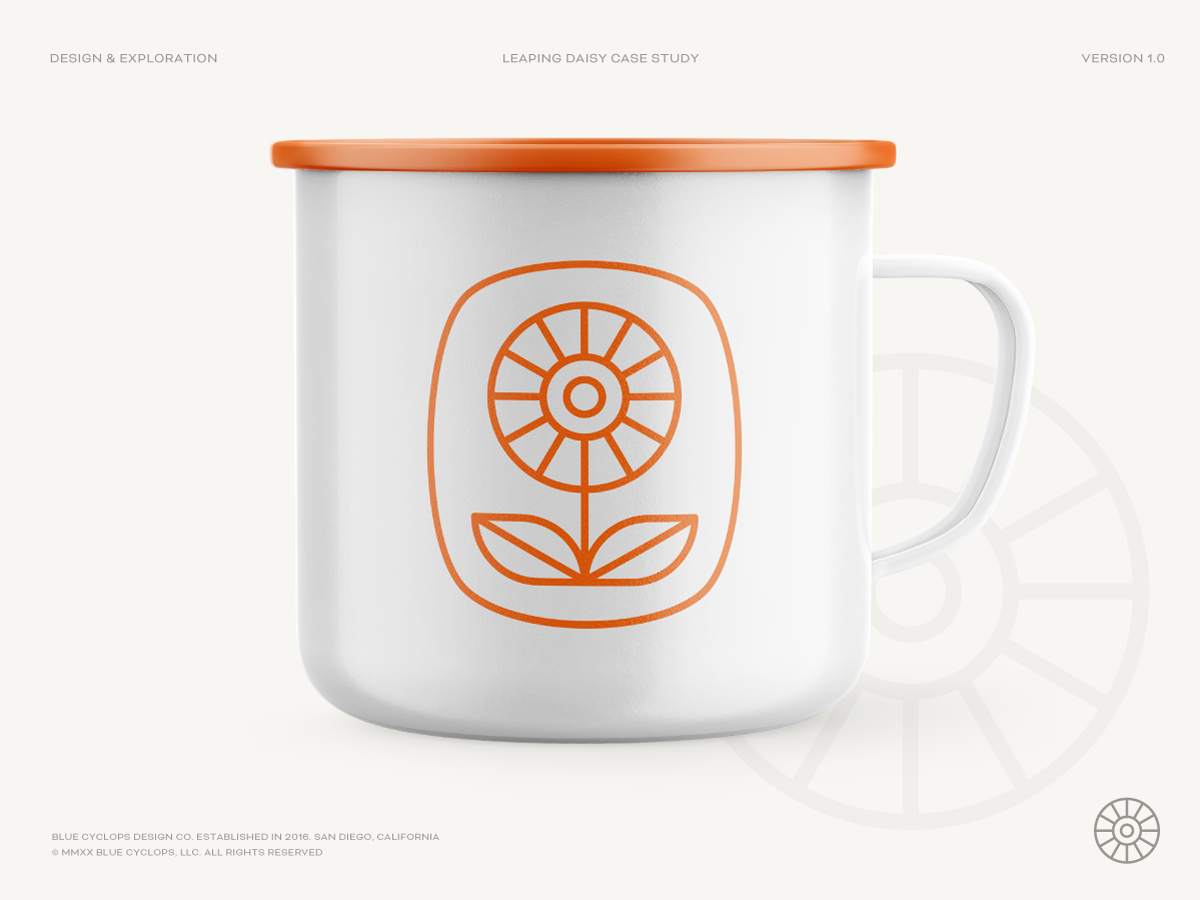 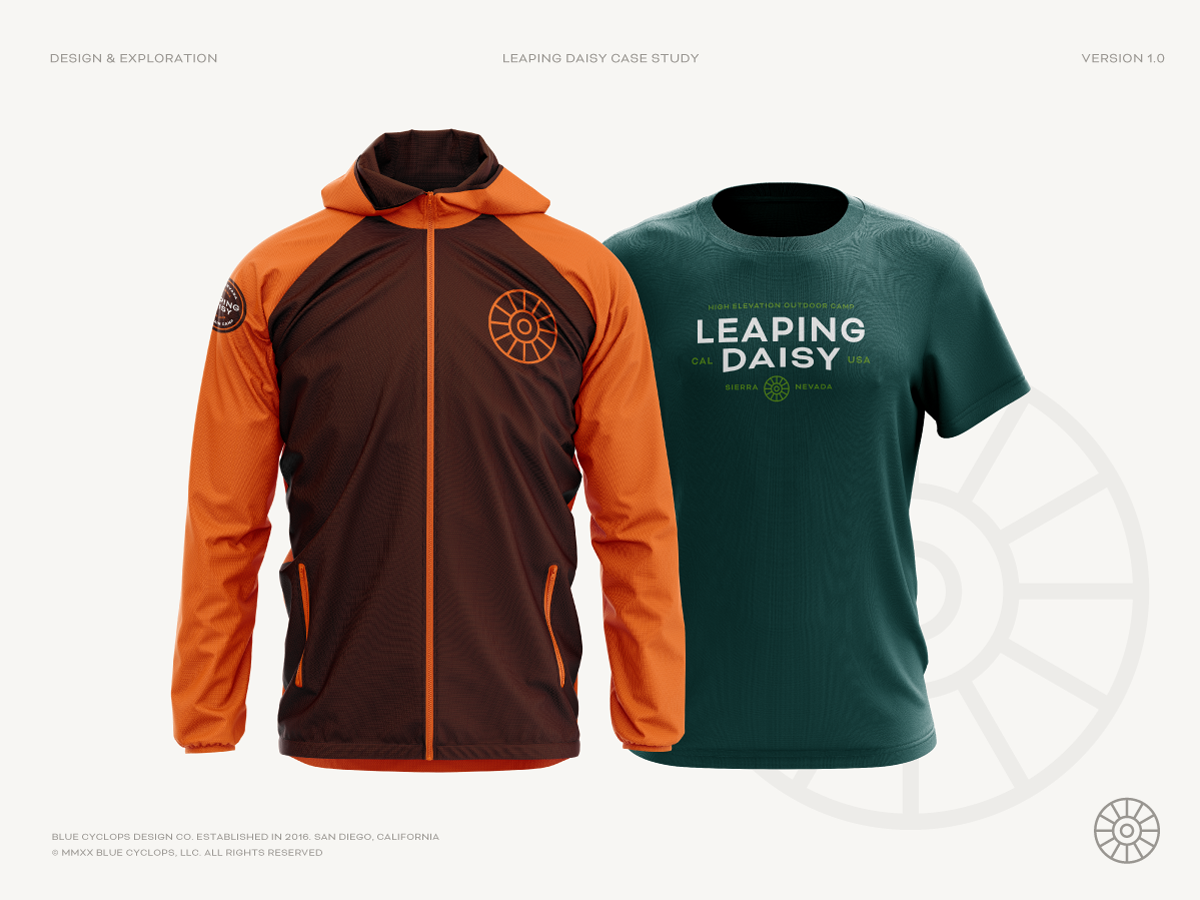 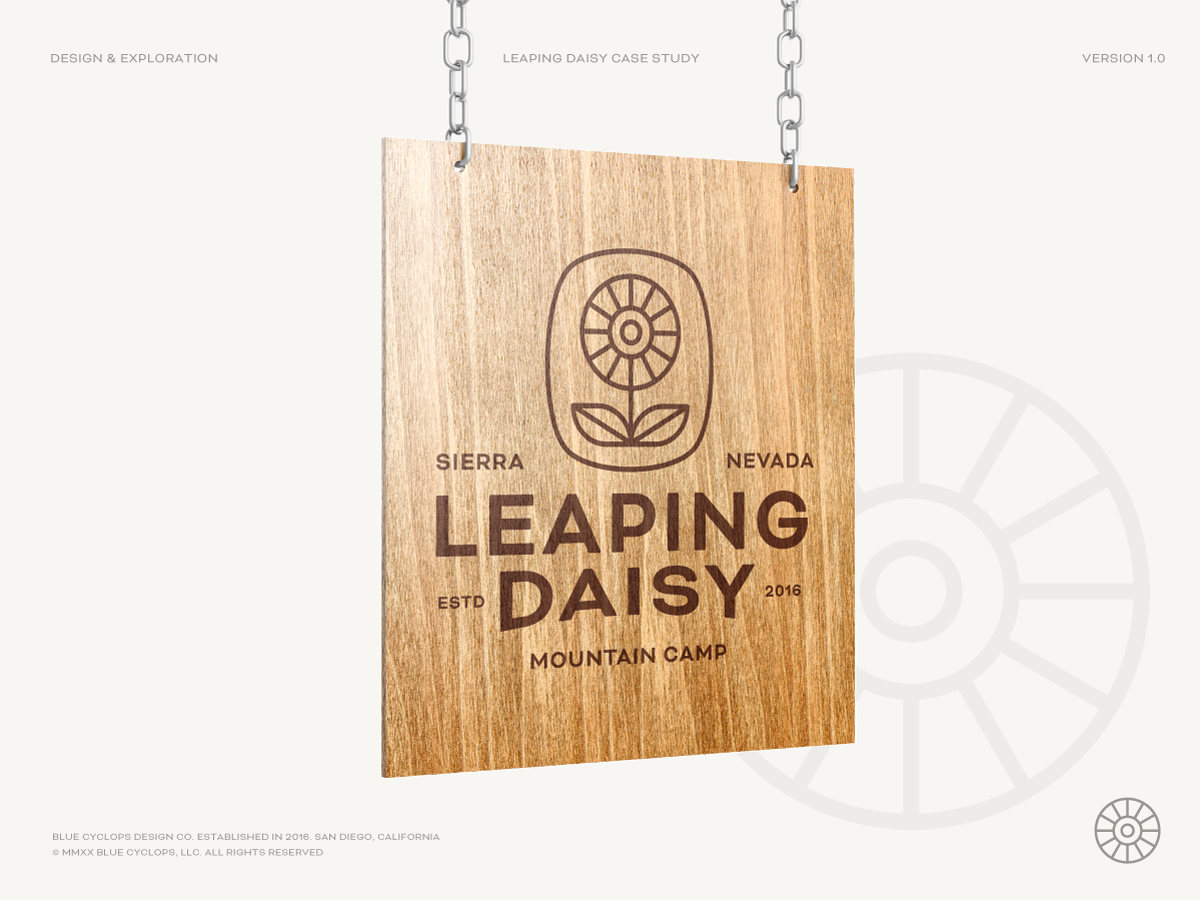 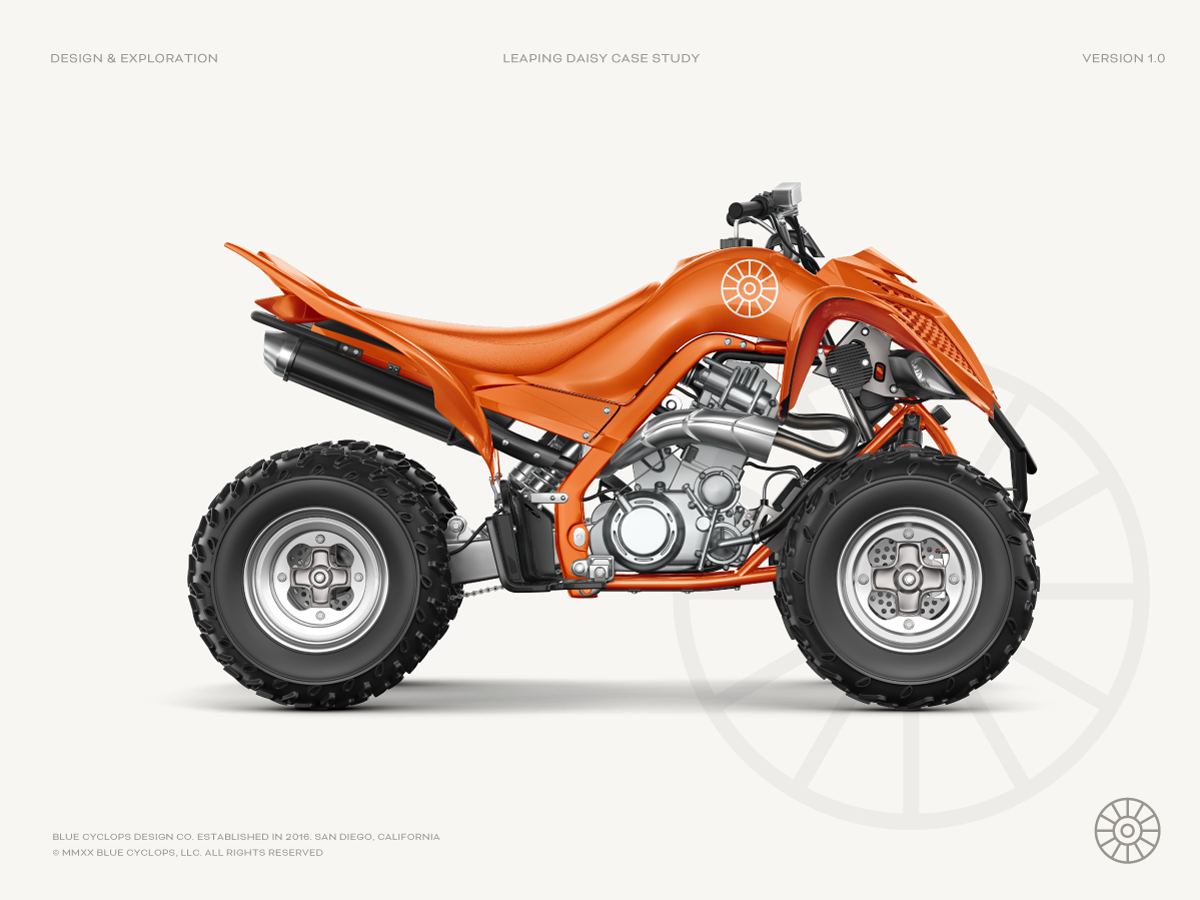 As we stated above, this project would go on to be one of our favorites of 2020. The client was thrilled with the project's execution and what it means for the future of Leaping Daisy. In the end, we plan to work with Leaping Daisy to create an illustration style system, an illustrated map, and more.

One of the important things that a lot of creatives and studios tend to forget is to have fun with their projects and this one definitely was a ton of fun. We're excited for what the future holds with Leaping Daisy and our partnership with them. 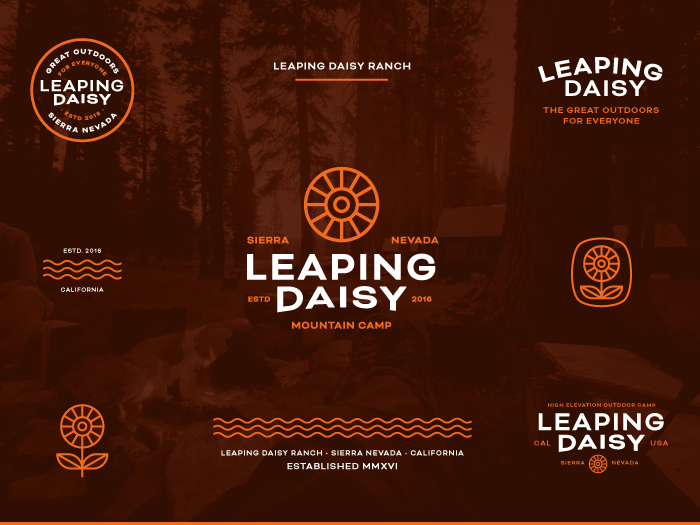 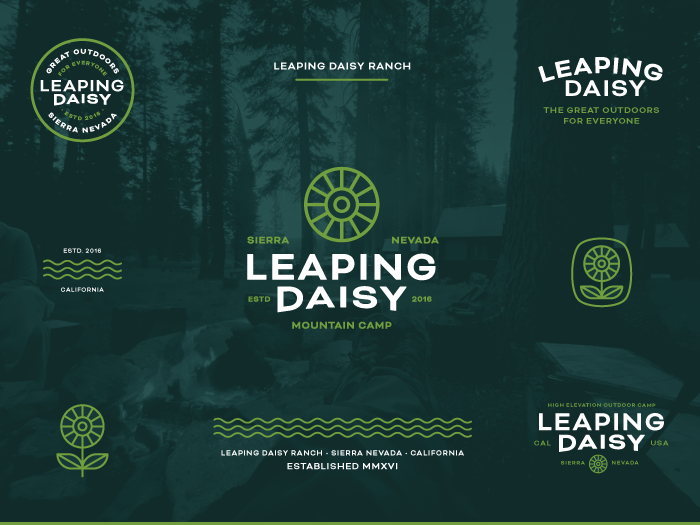